I take back everything I said about Apple…. 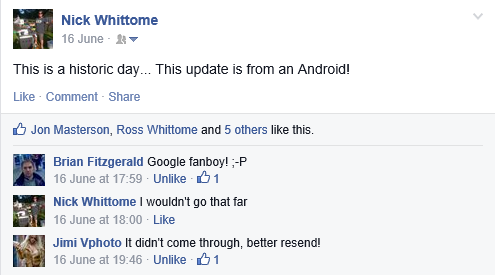 About 2 months ago, I got so amazingly frustrated with the iPhone 5S and the troubles with signal coverage and breakdowns that I bailed on Apple and got me some new Android S5’s.

I am now eating those words.   Today, the SIM card was put back in the iPhone and I wanted to share with you my own reasons why…

That is just SOME of the issues I had in the two months I have given this thing to try to get used to it.    I told my wife a few days ago that I was changing back to Apple iPhone.   To which she gave a smile and said “I have been waiting.   The enjoyment I have got from watching you try to pretend you like that Samsung has been entertaining”.    I guess that says it all.

Though…   I really do wish that I could get my apps for Windows Mobile, because THAT is an interface I prefer hands down!

19 Replies to “I take back everything I said about Apple….”